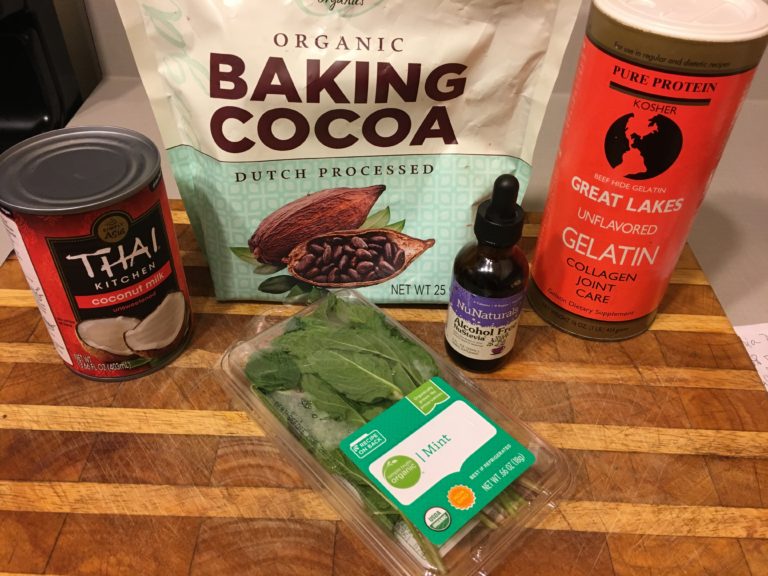 Let sit for 10-15 minutes however, ideally overnight in the fridge.

Then top with a few fresh raspberries and enjoy!

In blender mix together entire can of coconut milk, cacao powder, stevia and mint leaves. Blend until smooth and the mint leaves are blended completely into mixture.  Pour into a medium sauce pan and whisk while simmering on low for about 5 minutes to melt the coconut milk and dissolve into the mixture.  When warm pour back into blender.  Turn on blender on a slow setting and slowly pour in the 1 TBSp gelatin. Blend for 30 seconds.  Pour into serving size cups.

Place in the fridge for several hours then enjoy!

Note: For those of you who aren’t sensitive to vanilla, a tsp of vanilla extract can help to really smooth out the flavor texture in this and allow the chocolate to pop just a tad bit more. ?

You might be surprised to learn the root cause could be what you’re eating, even if you eat well. Based on the experience of specialists in Fibromyalgia Syndrome (FMS) and Chronic Fatigue Syndrome (CFS) these have four possible root causes. In this blog we will talk about the first root cause: Food Sensitivities

Signs that food sensitivities could be the culprit of your health struggles are:

Avoiding foods that you are sensitive to may be the answer to help you feel a whole lot better!

The challenge with diagnosis of Fibromyalgia, chronic fatigue, IBS or migraines is that there is no solid understanding of the ROOT CAUSE of these issues.

At the age of 25 years-old, after years and years of personally struggling with migraines, fatigue and an overall lousy feeling my primary care doctor diagnosed me with IBS, migraines and Chronic Fatigue Syndrome. Yes ALL three! Initially I was so thankful to have a real diagnosis after 11-years of going from doctor to doctor, receiving blood test after blood test and not having any answers as to what was wrong. Countless doctors suggested that I was depressed and so they would say: “Here is an antidepressant.” They were right, after all, I WAS depressed after struggling with awful symptoms without answers for over a decade and I was starting to feel crazy that it was “all in my head” as one doctor told me. Receiving these diagnoses was massively edifying and at the same time they were another roadblock to figuring out how to reclaim my health.

These are diagnoses that have no real cure and specific protocol as to how to get the symptoms in remission. It was so miserable living with chronic grogginess, migraines and muscle aches that made it insurmountable to do simple daily tasks. I was filled with appreciation of having an answer and at the same time felt total despair of what it meant for the prognosis.

I found myself not ready to give up so I asked my doctor if food testing could be what was causing the symptoms. “No, your symptoms have nothing to do with food” is what my doctor said. I decided that I had to be my own health advocate, my gut told me (literally with IBS lol) my symptoms and food were connected. I was right!! My testing came back with an allergy to soy, barley and oats.

I took those foods out and I just could not believe the difference! I had energy! I released weight that had been stuck for years! My migraines were gone! I felt massively better. I noticed that oats and barley were the cause of my ‘IBS’. Avoiding those immediately meant I no longer suffered from IBS. I began to notice soy was the cause of my muscle aches and migraines so by avoiding all forms of soy I no longer struggled with those either! I still had daily fatigue but man was it great to be free of IBS and migraines!  (Want to find out if seemingly innocent foods are the reason for your health challenges too? Find our more about Food Sensitivity Testing.)

A new lease on life!

Then, I must be honest I was also got very angry that my doctor had blatantly told me that food could not be causing my symptoms. Angry that after years and years of suffering, the doctors did not help, they did not know food was the culprit the whole time! This, in part, created my passion for what I do now: Wellness Coaching and Food Sensitivity Testing with my company, Blissfully Healthy Women’s Wellness Center.

I continued to struggle with fatigue and finally in early 2016 after a 3-month relapse of fatigue and massive testing from various doctors; MS specialist, Rheumatologist, Neurologist, as well as working with several Naturopathic doctors all tests came back ‘healthy’ again. No adrenal fatigue, no candida overgrowth, no MS, no Lupus and no Rheumatoid Arthritis. While this was a blessing it still gave no answer to why I felt so tired all the time and since I had done all of the testing, the diagnosis of exclusion was: Fibromyalgia and being re-diagnosed with Chronic Fatigue Syndrome as two separate conditions due to the significance of the daily fatigue.

I had a good cry, then wiped my tears away and decided that I would do what I need to feel better. I remembered how food testing, years ago had helped me feel so much better so I looked into different types of food testing. I discovered a different, highly effective, test that most doctors do not have access to, the FIT test and decided to give it a shot.

Two weeks later my test results came back and I was highly reactive to eggs, bananas, vanilla and a few others. No wonder! I ate a banana several times a day in my green smoothie, vanilla in my coffee in the morning and eggs for breakfast almost every day! No wonder I felt crummy!! I dived in and eliminated the foods. I felt so much more energy, the fatigue, asthma, body aches and joint pain were gone! Now I have so many more days without Fibromyalgia symptoms. All with answers to how to feel better from this amazing test. After my personal experience I knew I had make this available to my clients, I wanted them to feel their best too. During 2016 I was able to test over 53 clients, ALL of them reporting back how much better they feel with the knowledge they’ve gained and the lifestyle adjustments they’ve made. Symptoms have improved or have completely resolved in many cases–even symptoms they didn’t realize were connected to food sensitivities!

The biggest thing I can share with you if you are feeling hopeless is: Don’t stop until you achieve solutions! You deserve to feel your best.

If you’d love to achieve relief from your disruptive symptoms and discover the foods that are contributing to your health challenges, let’s find out if FIT Testing is the right fit for you.

Here’s some “food for thought” — this week I am sharing with you my strategy for eating out : )

Instead of having the full meal, I skipped the sides of rice and beans and enjoyed 2 delicious tacos! And guess what…it was plenty of food!

By allowing myself to eat what I really wanted to eat I found it easy to use portion control. By doing so I was able to enjoy my favorite food, the time with my family and I did not feel guilty afterwards.

"I learned a long time ago that there is something worse than missing the goal, and that’s not pulling the trigger."

"You can’t be that kid standing at the top of the waterslide, overthinking it. You have to go down the chute."

"Don’t look at your feet to see if you are doing it right. Just dance."

"Step out of the history that is holding you back. Step into the new story you are willing to create."

"You can be the lead in your own life."

"The most difficult thing is the decision to act, the rest is merely tenacity."

"With the new day comes new strengths and new thoughts."

"You will never win if you never begin."

"Optimism is the faith that leads to achievement. Nothing can be done without hope and confidence."

"You can never leave footprints that last if you are always walking on tiptoe."

"The more things you do, the more you can do."

"Look your best - who said love is blind?"

"Make the most of yourself by fanning the tiny, inner sparks of possibility into flames of achievement."

"If you don’t like the road you’re walking, start paving another one."

"Owning our story can be hard but not nearly as difficult as spending our lives running from it."

"No matter how difficult and painful it may be, nothing sounds as good to the soul as the truth."

"We may encounter many defeats but we must not be defeated."

"I attribute my success to this — I never gave nor took any excuse."

"The most effective way to do it, is to do it."

"Never give up, for that is just the place and time that the tide will turn."

"Spread love everywhere you go. Let no one ever come to you without leaving happier."

What are you looking for?